History of the Circuit Court

In the early 1800s, the counties that currently make up the Eleventh Judicial Circuit were split among several different circuits. For example, initially the First Circuit consisted of Calhoun Green, Macon, Macoupin, McLean, Morgan, Pike, and Sangamon counties. It had two terms of court limited to three days each, with Samuel Lockwood as judge. The act of incorporation provided that all court for said county was held at the house of James Allin until public buildings were erected, unless changed to some other place by the County Commissioner.

Growth & Reduction of the Eighth Circuit 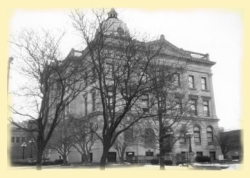 McLean County Courthouse from 1900 to 1976. Today, it houses the McLean County Historical Society and Museum.

In 1873, Ford and McLean Counties were made the 14th Circuit. In June of 1877, the Appellate Courts were established, and the Circuit Courts were rearranged, with the number of Circuits reduced from 28 to 13. The Eleventh Circuit consisted of Ford, Iroquois, Kankakee, Livingston, and McLean counties. Each circuit had three judges.

The circuit remained this way until 1897, when the 40th General Assembly passed an act that divided the State of Illinois, exclusive of the County of Cook, into judicial circuits:

The Eleventh Judicial Circuit has retained the same composition since that date.